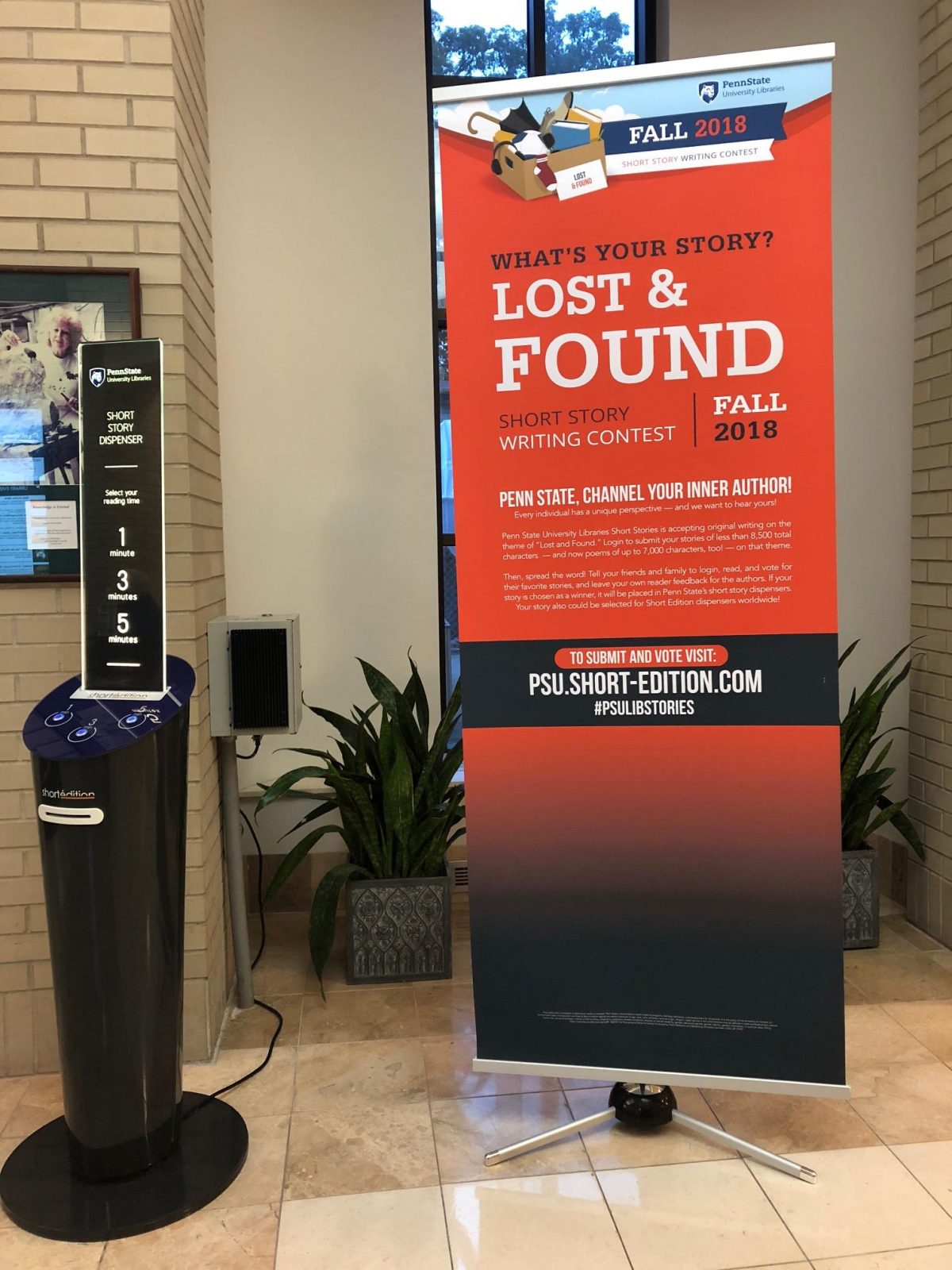 So, you might have heard of a machine that disenspers short stories. You’ll find these dispensers at airports, hospitals, gig cities, malls, and community spaces. With a press of a button, you can print off 1, 3, or 5 minute short stories or poetry. These dispensers are made by Short Edition, a company based in France whose mission is to “propel literature” and share short stories and poetry with as many people as possible. Their machines have been featured stories at Mental Floss, LitHub, The New Yorker, and The New York Times.

There definitely is something novel about the machines; I’m actually writing this post while sitting near one in our library. Penn State got several dispensers in spring 2017 and PLA just finished up their Courage writing contest, and I can only assume some more libraries will be getting their own dispensers in the next several years. I love watching students approach the dispenser, some not quite sure what they are all about. They press the button and the machine whirls a bit, gearing up to print the story. It spits the story out, the five minute stories always my favorite to watch because it’s always longer than you’d expect. They smile when they pull it out of the dispenser, folding it carefully while they walk away. My favorite comment to hear is, “Can you actually read that story in one minute?”

Short Edition started in 2011 and the company created their dispensers in 2015. Libraries have gravitated towards these dispensers and the mission behind the company, we seem like a natural fit. When Penn State first got our dispensers, they were fun machines we had in our library and in spaces across campus. But we wanted to do more than just have students print out stories; we wanted to build a program that could showcase student, faculty, and staff writing. I became part of the group tasked with building this program in fall 2017. In the past year, I have learned a lot — about Short Edition, the creative writing scene at University Park and the campuses, and how to take a fuzzy vision for a program and turn it into something a bit more defined.

I got involved because our administration had felt strongly there should be students involved with the editorial process and naturally, the Student Engagement Librarian knows some students. Other than some loose guidelines from the Editorial Board at Short Edition, we really had the chance to create what we wanted. While the machines themselves are “easy” (just plug them in and let them print), there is much more beneath the surface, and at the complimentary website, where the magic really happens in converting community content into something you can print off on the dispensers. There was definitely a learning curve and when we’ve got a contest running, I email my contacts at Short Edition at least once a week. We’re currently running our second writing contest, around the theme of Lost & Found. Running these contests seem like the best way to get content onto our website and our dispensers — having a broad, general theme (and prize money) seems to attract more writers than a rolling submission process. Sometimes, I have gone up to the group of students printing off stories and ask, “Did you know you can submit your own stories to this dispenser?” The students often chuckle and shake their heads, “I just like reading the stories, I don’t write” they respond. We’ve got a little hurdle right now — finding folks who not only enjoy the machines, but also want their stories and poems to be the ones getting printed out.

The other aspect about this project is now that we have some consistency around contests, our Editorial Board and guidelines, we are adding other elements to the program. Community members in Centre county can now add their content to our website and dispensers, we are adding dispensers to some of our campuses across the state of Pennsylvania, and working locally with the high school to see what their program could look like. It’s a lot of juggling and deciding what is urgent, what decisions will be strategic, and what elements we can hold off on until we are more ready. In that way, this program is elastic, willing to bend in what direction we think is best, at the time.

In all of this, when you chart uncharted territory, people look to you for advice or ways forward. Since our Penn State Short Edition project has taken off, I’ve received emails from a whole host of librarians, all interested in what we’re up to. I send along documentation, neatly packaged in a Box folder, explaining some of the unique elements of our program. In these email exchanges, I receive my favorite compliment, “Wow, this is thorough.” I’m curious to see how many other academic libraries invest in Short Edition in the next few years. Maybe, in the future, we can find a way to connect them, in a contest or through our Editorial Boards.

The biggest thing I’ve learned since taking on this project is that you sometimes just have to do the thing, even if you’re not 100% sure it will work. I’m someone who craves feedback and seeks a lot of permission first; spearheading the Short Edition project has definitely challenged that side of me. I’ve gotten a little better at just doing the thing and being confident in whatever decision I’ve decided to make. There’s so much room to grow, experiment, and take this project to another level so onward we go, charting new territory and propelling literature forward.

Note: If you’re interested in seeing some of our documentation for Short Edition or learning more, feel free to send me an email at hmf14@psu.edu.