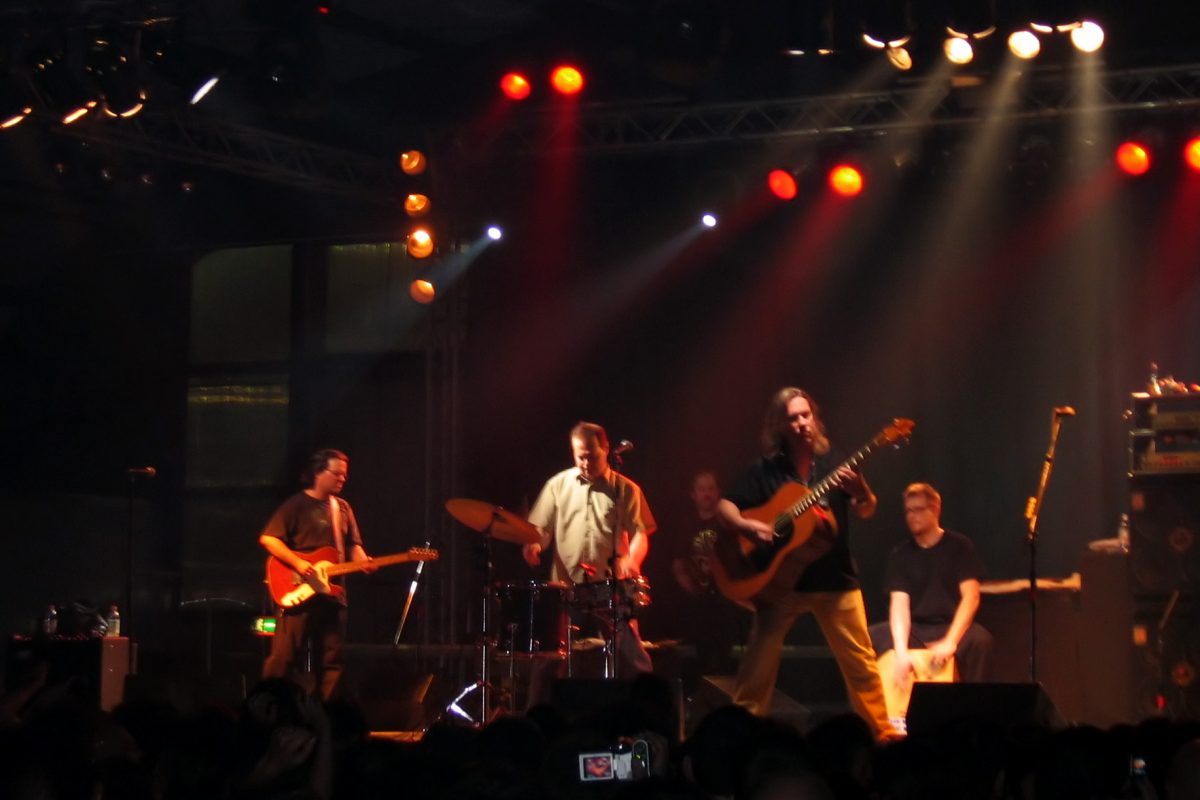 In my new position at the University of Washington I have a long commute, as one would expect, in a large city like Seattle. On this commute I listen to music and read and on the bus last week I reached for an old Midwestern standby, The Violent Femmes only to find that their first album, Violent Femmes (1983) had been removed from streaming platforms and, despite my purchase of the album electronically, had been removed from iTunes for me to listen to. (Reader, don’t worry many of the songs are available on their greatest hits record, aptly titled, Permanent Record.)

In the last few weeks librarians have been confronted in various ways with the difficulties surrounding streaming and licensed materials. Kanopy, one of the largest and most popular streaming services available for library users, was recently and publicly dropped by the New York Public Library (NYPL). How we found this news out, and how it became well known, was a result of Kanopy sending an email to NYPL users who had registered for the service prior to NYPL’s own statement on the issue. In part, their message explained “The New York, Queens, and Brooklyn Public Libraries have decided to discontinue Kanopy’s film streaming service to its patrons…Film as a public resource is a critical part of New York’s culture and communities. We have enjoyed furthering the New York City Libraries’ mission of providing open access to knowledge… [emphasis mine].”

Setting aside for a moment the frankly gross overstep of a vendor directly reaching out to library patrons about library budgetary or mission changes, let’s focus in on the language that Kanopy uses to describe their service: public resource and open access. For those of us who work in academic libraries and have dealt with the ongoing difficulties with providing access to streaming media for our communities, and especially those who are aware of Kanopy’s expensive nature, these kinds of words might make us take a pause.

As a cinema librarian I can say that film is an important part of cultural legacy and should be a public resource and that access to film should be part of any library’s collection mission. Yet, for many of us the way we consume and purchase media has dramatically changed in the past decade, as streaming and licensing digital files have become the norm for the majority of consumers. Kanopy fits into this very nicely. It’s interface looks remarkably similar to any other streaming platform, and invites users to click through its offerings like they would for Netflix, Criterion Channel, and Amazon Prime. It’s hidden cost, as we know, only triggers when a user clicks on a film and watches a certain amount of it. For users it seems free; like the offerings from Netflix that despite the monthly cost allows users to peruse and sample any film in the catalog. For the most part this is how streaming platforms like Kanopy have advertised themselves to our users.


I want to be clear that it is not my intention to pile on to Kanopy, because I truly believe that Kanopy provides a great service for spreading art and indie film to the widest audience. Rather I want us to think about how we are building collections and gathering materials in this new digital age of instant gratification and expectations.

Over the last year and especially in the wake of NYPL’s decision, I have seen many articles touting and promoting the great new “free” hidden service provided by the library. This article from Entertainment Weekly https://ew.com/movies/2019/01/18/free-streaming-service-kanopy/ emphasizes the accessibility and the free cost as these pillars of why Kanopy is amazing for users. And Kanopy for their part makes a pretty compelling case for this kind of access  CEO Olivia Humphrey states “‘We have such a wide audience,’ says Humphrey. ‘We have people who can’t afford an internet connection that go down to the local public library to watch…. That’s a really important demographic for us, [as much as] cinephiles in L.A. and New York.’ Part of serving that audience is finding what Humphrey calls “content gaps” in other streaming platforms and trying to fill the void” This is something that I think is a really wonderful part of Kanopy, is that it allows access to art and indie film through public libraries but at what cost?

Well…we often don’t know what the cost is. The model is certainly different at Academic institutions but one of the cited figures for public libraries is $2 a watch for each film, and some libraries have limited how often users can watch films a month in order to keep these figures down (
https://www.indiewire.com/2019/06/new-york-public-library-drops-kanopy-netflix-alternative-too-expensive-1202153550/ ) . For Academic institutions, Kanopy, and other services like it, are fairly reminiscent of our licensing agreements with our ebooks, and costs can be astronomical. In a Film Quarterly article critiquing the “freeness” of Kanopy, Chris Cagel, a film historian at Temple University, writes “Instead, Kanopy’s platform drives “patron-driven acquisition” in which three viewings (defined as 30 seconds or more of a title) trigger a library license fee per title. (The figures I’ve seen are $150 for a year, $350 for a 3-year license, though the price might vary or change over time.) (see: https://filmquarterly.org/2019/05/03/kanopy-not-just-like-netflix-and-not-free/ )” These costs can quickly go out of control for many libraries, and the larger the population and the more articles about how this “free service” is provided by libraries, complicate this matter. It leads us to the moment where we are forced to cancel subscriptions because our patrons are using it, rather than how we often weed in our collections based on lack of use or usefulness in a general sense.


…the larger expectation for our library within the community is that we are permanent repositories for information (see the issues we generally see when library’s weed their collections) digital media is anything but permanent, and we have to reconcile this fact with our user expectations.

I want to be clear that it is not my intention to pile on to Kanopy, because I truly believe that Kanopy provides a great service for spreading art and indie film to the widest audience. Rather I want us to think about how we are building collections and gathering materials in this new digital age of instant gratification and expectations and how we tell that story to our users. Our users will start to feel the loss of licenses when materials start to leave our collections, just as they are starting to see their own digital materials lost in their personal collections. On the same day that Kanopy and NYPL parted ways it was reported that ebooks purchased through the Microsoft Store would be deleted this month from those who had purchased them. https://gizmodo.com/ebooks-purchased-from-microsoft-will-be-deleted-this-mo-1836005672

Digital items with DRM (digital rights management) are never fully owned, instead they are licensed. You can read more about DRM from the grassroots anti-DRM movement Defective By Design. They even wrote an open letter to libraries https://www.defectivebydesign.org/LetterToLibraries. These objects can be locked to prevent sharing of the material to other users and they can be taken away, like the ebooks or like my precious Violent Femmes album. My institution is well off enough to encourage our subject liaisons to purchase ebooks without DRM (which increases the costs substantially), but many public libraries or smaller academic libraries cannot afford to pay an extra $150 to make sure digital items are the community’s to keep. But the larger expectation for our library within the community is that we are permanent repositories for information (see the issues we generally see when library’s weed their collections) digital media is anything but permanent, and we have to reconcile this fact with our user expectations.

In my own life I have begun collecting materials for myself in non-digital form. This means that I have spent money buying twenty-year-old video games, hard to find DVDs, and vinyl because I am aware of the tenuous grip that we have on our digital files and media. It is essential that libraries work to make our communities aware of the restrictions and the fugitive nature of digital licensed materials and platforms and work with our users to ensure their needs are met in this changing time. NYPL for their part explained their decision to move away from Kanopy stating that “The Library made this decision after a careful and thorough examination of its streaming offerings and priorities. We believe the cost of Kanopy makes it unsustainable for the Library, and that our resources are better utilized purchasing more in-demand collections such as books and e-books (https://www.nypl.org/press/press-release/june-24-2019/statement-about-kanopy)

For a city of 8 million people, Kanopy was perhaps unsustainable, but NYPL is also making a point about how they see their collections growing and that is in books and ebooks. For libraries providing for the public good means making these kinds of decisions, and we need helpful partnerships with our vendors to provide this access. While I do not know what was going on in the minds of the directors of NYPL, it sure does not seem like the library system was wanting to wage this battle in the open prior to Kanopy’s patron email. Yet, this has become a moment where librarians can have conversations with patrons about the costs and limitations of streaming and digital materials. I, for one, have received several messages from my faculty colleagues about how the NYPL decision impacts us at the University of Washington, and I tell them that while it won’t change the way we interact with Kanopy (that decision was made long before I came here) but that this is an important teaching moment in our current climate. While the vendor spurred this conversation, I believe that libraries can have an important voice to share in this new media age.